Last Thursday (19 May) I organised a #asktheguru event, one of CIPR Inside’s small, informal and popular events, at the offices of Ruder Finn UK. As one of CIPR Inside’s lead sponsors the team hosted the event for us in their fantastic new offices in Finsbury Circus, London.

Their team space is adorned with this fabulous wall art. 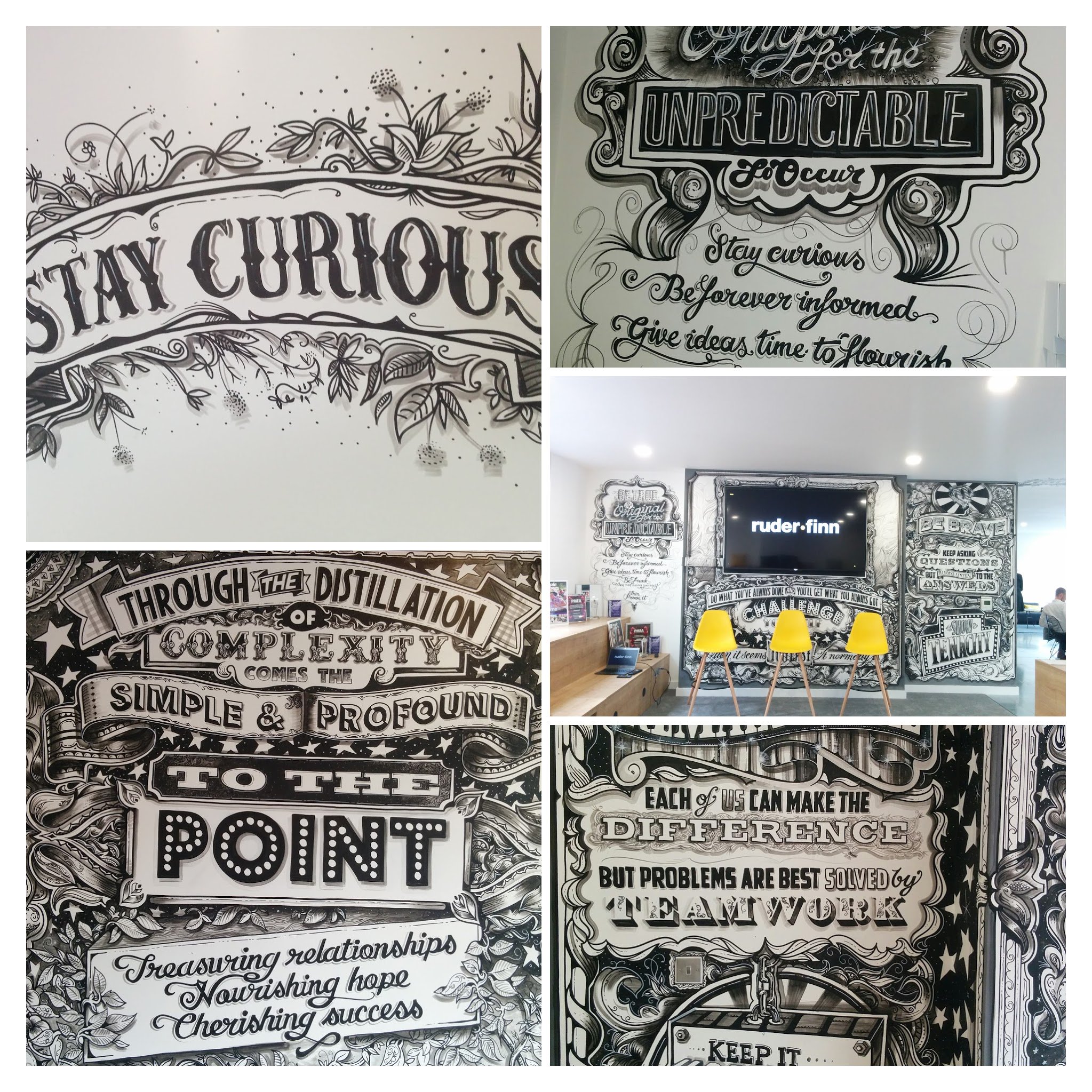 We invited three gurus from our crop of #insidestory award winners 2016 to come and share their experiences of storytelling in their organisations. They did just that, no powerpoint in sight they practised the principles of great storytelling.

John Townsend, Internal Communication Manager at The Children’s Society and this year’s winner of the acclaimed Clare Latham award for Best individual contribution at our #insidestory awards

Kate Shaw, award-winning Internal Communication Manager from Nationwide, who took home a bundle of awards from this year’s #insidestory awards among others.

Krishan Lathigra, Head of Internal Communication & Engagement, Foreign & Commonwealth Office who also scooped an #insidestory award for the People and Places magazine at the FCO.

Each organisation is very different and they each used storytelling in various ways, but each was highly effective in achieving their aim, to engage their people. They proved that ‘storytelling’ can and should be used beyond using it as the latest buzzword phrase to give what we do a gloss, they showed that real storytelling used strategically can change the way we communicate and truly connect with employees.

John created storytelling workshops at the NSPCC when he worked there and is using a similar tactic at The Children’s Society now. These workshops for leaders and shop managers help to give people the sense of purpose in what they are doing and have resulted in engagement figures at 90%. John used an urban myth, telling it like it was his personal story to make the point that ‘personal’ stories make a connection. Using different tactics to make the story ‘sticky’ – giving us details that we can remember, relate to and retell, gave the story life and made it resonate with us. This example was a trick but the use of storytelling in the latest Save the Children campaign, A second a day, for refugee children makes the point and emotionally connects us all to their situation.

John shared this video with us.

Kate Shaw and the team at Nationwide used the power of human stories to get more people interested in and signing up to make additional contributions to their pensions. Pensions are boring, administration of them is dull and who thinks about that anyway? But most of us think about our dreams of what we want to do when we no longer work. The Nationwide team invited people to share their dreams and used these dreams in their communications to get people signed up to make extra contributions. The difference is huge. It was just 10% of employees signed up to make additional contributions and now there are 83% of employees now paying in extra contributions to their pensions.

This is the Nationwide Pensions video which forms part of the overall communication campaign for pensions contributions.

For Krishan Lathigra at the FCO, budgets are small or non-existent. When challenged with the notion of engaging 13,500 mostly non-British employees in 268 countries with minimal budget Krish returned to a traditional format with a new approach. The FCO produces an internal magazine where the editorial is exclusively crowdsourced from the employees for the employees and managed entirely by the small in-house team. In Krish’s words “the day that a senior exec interview appears in the magazine is the day that it will lose what makes it special.” Sharing stories about the people, their places and their worlds in and around the embassies where they are based are providing a connection between employees across the globe that is driving up the sense of belonging with the FCO.

Nick Leonard, MD at Ruder Finn UK hosted the event and summed up with three top points from the event, “Make your storytelling Personal, emotive and inclusive to engage and inspire people to take action.”

There were lots of great questions from the audience and the evening was a brilliant opportunity to meet and connect with fellow Internal communication professionals.

Ruder Finn has an Internal communications survey open now, so please tell them what you think about comms today: Internal and External Communications – Singing in Harmony or Creating Discord?

Read more on the event here:

Storify of the tweets from the event

Little Bird is branching out

Millennials and your business

This site uses Akismet to reduce spam. Learn how your comment data is processed.

Close Menu
We use cookies to ensure that we give you the best experience on our website. If you continue to use this site we will assume that you are happy with it.Ok